The 2006 – 2012 Professional Regulatory Board of Architecture (PRBoA), which started with its first member on 3 November 2006, was fully reconstituted as of 30 March 2007 in full compliance with Republic Act No. 9266 (The Architecture Act of 2004). It served over the period 16 November 2006 through 23 November 2012 i.e. six (6) years and seven (7) calendar days (which ended with the appointment and swearing-in of the new PRBoA Chairman to head the 2nd reconstituted PRBoA).

The PRBoA as an entity is under the administrative control and supervision of the PRC, a quasi-judicial and regulatory entity that forms part of the executive branch of the PH Government. As such, it does not act independently on matters involving the regulation of the practice of the profession of architecture in the Philippines. The reconstituted PRBoA was a collegial body and was active in the areas of executive action relating to the implementation and enforcement of Republic Act No. 9266 (otherwise known as the PH “Architecture Act of 2004″), its implementing rules and regulations (IRR) and derivative regulations e.g. other executive issuances of the PRBoA through the PRC.

The 16 November 2006 to 23 November 2012 reconstituted PRBoA was composed of three (2) privately practicing architects (working only on a part-time engagement as PRBoA members):

From 2009 through 2012/ 2013, all three (3) 2006-2012 PRBoA Members served in a holdover capacity until their respective replacements were appointed by the President of the Republic of the Philippines (PH).

As of 23 November 2012, the 2006-2012 reconstituted PRBoA regulated the practice of about 30,000 PH-registered architects (RAs) i.e. natural (not juridical) persons nationwide and overseas. Of this number of RAs, it is conservatively estimated that less than half (approx. 14,000) have updated their professional identification cards (PICs) for practice and that up to 50.0% of said architects may already working outside the country.

The PRBoA supports the Asia-Pacific Economic Cooperation (APEC) Architects Register and the Association of Southeast Asian Nations/ ASEAN Mutual Recognition Arrangement (MRA) and its ASEAN Architects’ Council (AAC) for borderless architectural practice/s, as qualified under the protocols/agreements such as the World Trade Organization General Agreement on Trade in Services (WTO-GATS), and as qualified by valid and subsisting laws on architectural practice in the Philippines.

The PRBoA also administers the Licensure Examination for Architects (LEA) given twice in Manila annually by the PRC and of Foreign LEAs (FLEAs) given as part of the now annual PRC Special Professional Licensure Board Examinations (SPLBEs) in such countries as Saudi Arabia (KSA), Qatar, Dubai, the United Arab Emirates (UAE), Hong Kong and Singapore, for expatriate Filipinos (overseas Filipino workers or “OFWs”). Over the years 2007-12, the LEA mortality rate ranged from 49.0% to 68% per examination. Over the past 57 years (1955-2012) of the regulation of Philippine architectural practice, only an average of about 400 annually were granted certificates and licenses to practice. With the elimination of manual drafting in the LEA subject of Architectural Design and Site Planning (ADSP) starting in late 2009 and with other LEA/ FLEA-related reforms, the LEA/ FLEA passing rates have more or less stabilized at 50 – 52%.

Among the executive concerns already addressed by the 2006 – 2012 reconstituted PRBoA were: 1) general information dissemination concerning the laws/ regulations on architectural practice; 2) enforcement mechanisms against illegal practitioners (non-architects); and 3) the completion of the amendments to the 1979 Standards of Professional Practice/SPP (otherwise known as the Architect’s National Code/ ANC) in 2010. Among the quasi-judicial responsibilities of the PRBoA are the hearing of and the promulgation of decisions on administrative cases filed against architects, and the review of cases against illegal practitioners for endorsement to prosecutors and PH courts.

The preparation, signing and sealing of architectural plans and documents are only for PH-registered architects and not for any other RLP or other unqualified entities under PH law (specifically certain PH civil engineers and other unregistered persons as defined by law, specifically under R.A. No. 9266). As such, the 2006 – 2012 reconstituted PRBoA actively campaigned from 2007-12 for the full implementation and enforcement of the pertinent provisions under R.A. No. 9266, which all limit the preparation, signing and sealing of architectural plans and documents only to architects and which mandate all officials of the PH national and local governments to fully implement and enforce the said provisions. This may be taken to mean that even architects with expired PICs may be restricted from practicing until they are able to renew their PICs (although such is subject to legal interpretation as a valid certificate of registration is the true license to practice).

Among the legal steps taken by the PRBoA to fully implement and enforce R.A. No. 9266 include the filing of graft charges against national and local government officials who refused to implement and enforce R.A. No. 9266 and the harmonized provisions of the 2004 Revised Implementing Rules and Regulations (IRR) of P.D. No. 1096 (the 1977 National Building Code of the PH/ NBCP). Also impleaded in the said suits are private individuals who willfully resisted or violated the said laws.

Among the legislative initiatives of the 2006 – 2012 reconstituted PRBoA were participation in collaborative efforts to repeal the 1977 National Building Code of the PH (NBCP or Presidential Decree No. 1096), the amendment of anti-graft laws, the review of bills that tended to undermine professional architectural practice, the professionalization of the Local Government Unit (LGU) positions of Local Building Official (LBO) and Assistant Local Building Official (ALBO), bills on non-mobile billboards (NMBs), consulting service regulation and various other related concerns. 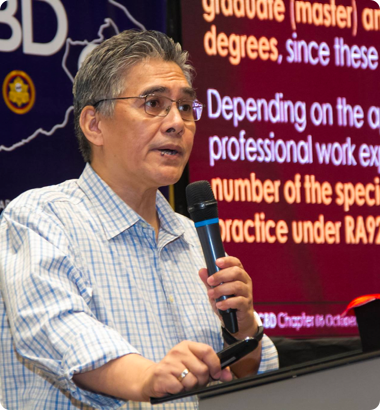 Continuing Development from’12 to Present

Looking for a certain legal topic?